Please ensure Javascript is enabled for purposes of website accessibility

In our time we’ve seen all manner of computing disasters, from MacBooks that have been “christened” with wine or coffee, to laptops that are stepped on when placed on the car floor, to CPU’s burning up when installed with a “Windows” sticker placed between the CPU and the heatsink, to irate mothers who are certain that the malware running riot on their laptop computer is due to some far flung hacker cell, rather than being, how shall we say, an inside job?

Yet this one particular computer was a cluster-muck to rule all PC pickles– a true tail of Windows woe and a PC that was all but about ready to give up upon life. 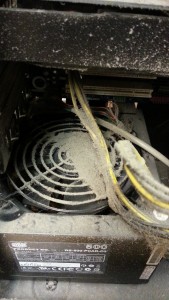 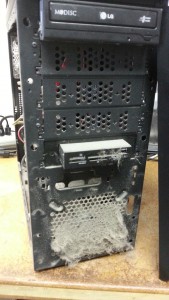 A clogged computer fan will not cool the computer.

The Story of Steve and his Critical Computer

Steve’s computer was flat lining – consistently crashing time and time again. He thought that the root of all his woes was an upgrade from Windows 7 to Windows 10. Yes, we have seen many problems from this Windows 10 upgrade, yet there was something else amiss that was certainly leading to the many issues Steve was facing. So here’s how we went about drilling down into a full computer diagnosis and solution.

Computers are often seriously misleading – looking super shiny on the outside but being home to more muck than a one hundred year hoarder on the inside. As you can see from the pics below the dust issue with Steve’s computer had gotten out of hand. Pet dander, smoke, dust and dirt can all collect inside computers of all shapes and sizes. As you can see, our laptops, MacBooks, iMacs and desktop PC’s are rather good air cleaners.

This level of dust always leads to the computer getting too hot under the collar, which ultimately stops the PC from booting up at all.

We fixed this with a good old fashioned clear out, using a compressor to blow out all of the fur and dust.

Now, it was on to the next issue…

So we set about waging war on these nasty malicious codes, as we quarantined them to software purgatory before destroying all traces of their existence. After completing the virus and malware removal, we repaired  the damage to Windows 10 that these nasties left behind and installed Kaspersky anti-virus.

The result: A computer that had just upped its processing game tenfold running faster and delivering seamless computing. But we didn’t stop there.

Today, Steve is one happy computing bunny, and his PC has sent us an e-Thank You card for saving it from the big hardware hole in the ground.

Not sure if your computer’s less than stellar performance is down to digital dirt, dodgy sites or not dusting off the back of your Mac? Our team can help whatever’s causing your computer to churn and chug away. Think of them as digital Doctors, providing check-ups for computers that are suffering from a serious bout of file flu: Just drop by, or give us a call if you want to run your problem by one of our super nerds (and trust us, if there’s something that they don’t know about computer troubles then it simply isn’t worth knowing).

Does your computer, Mac or laptop have “hygiene issues?” Watch this creative video doodle with music:
https://youtu.be/Dc8r0Y1dBD4

We at Cantrell’s Computer Sales & Service, Inc. make the complex world of computers and IT networks easier for our customers. Please contact us for more information! Wade Cantrell is the CEO of Cantrell’s Computer Sales & Service, Inc. which is a value-added retailer and computer service business  located in Pleasant Hill, California.  We stock and source highly reliable computer equipment and parts.  We have been serving Central Contra Costa County customers (including Concord, Walnut Creek, Martinez, and Lamorinda) since 1998. For further advice on computers and computer-based solutions, business IT network issues, virus and malware removal, and computer repair, call Wade or any member of his award-winning staff at (925)827-1200.